My family loves Halloween.  We love dressing up in coordinating costumes and going to lots of Halloween activities.   My husband and I actually liked dressing up even before we had kids, but now it is even more fun and seems more acceptable and not quite as weird.

However, what I do not love is the ridiculous amount of candy but I understand that is a big part of Halloween.  I wish more of the activities could not be focused on treats but again, I get it, it’s Halloween.

When my son was finally old enough to understand the concept of Halloween and eat candy, I figured I would limit his intake to a few pieces that evening and then maybe 1-2 pieces the following days.   I was asking other parents what they do and a friend said they actually allow their kids to eat as much as they want on Halloween.  I am pretty sure my heart stopped.  What?  You let them just eat as much as they want?  How can you do that?  Don’t they eat a million pieces?  Doesn’t their stomach hurt?  Aren’t they then wired from all that sugar? 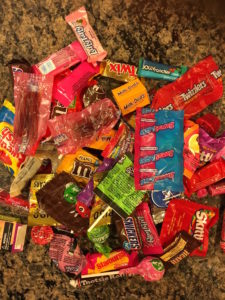 I have written before that I do think of one of our greatest responsibilities as parents is to teach our children how to take care of their bodies with good food and movement.  These are so crucial to long term health that I take it very seriously.  I understand that at 16 years old, my son will probably be getting fast food with his friends.  But as research shows and I mentioned in my last blog about soccer snacks, what they learn, observe and eat as young children can have an impact on their preferences later in life.   And at this point in their life, I get to control what they put in their bodies.   Just as they learn about heathy food from us, they also learn what kind of relationship to have with food.   With that being said, I am not trying to make foods bad and off-limits, but some foods are occasional and though maybe not best for our bodies, taste good, are fun and part of holidays and special activities.   I also do not want to be so strict that they are sneaking or hiding food or to create any type of food issues.  I have had my own food issues in the past and that is the last thing I want for my children.

So the last 2 years we have let them (last year Madelynn was only 15 months old so obviously we had to watch what she was eating) eat as much as they want on Halloween night.  This is still hard for me to actually accept and watch,  but I embrace it. I make sure they have a healthy dinner beforehand and kids are incredibly good at self-regulation, which many adults have lost.   I actually think they probably had only 5-6 peices of candy before deciding that they were full or decided it was enough.  Both of my kids, Caleb especially, are starting to realize that too much sugar will make their stomach hurt and that they will not feel good that night and often the next day.  So they learn moderation without strict rules and without me constantly saying no for one night of the year.  It is such a fun, crazy, memorable night for all of us.

So what about in the following days? I know there are tons of different ideals revolving Halloween candy including the ‘Switch Witch,’ donating it to troops, throwing it away etc.  I am not judging any of these as I think every family should figure out what works for them.

What we have done the last for few years is to keep it.  I am not going to make a big deal about Halloween and costumes and trick or treating and then throw it away.  I am not sure how I explain that to two small children.   The few weeks following Halloween, they are allowed to pick 1-2 pieces after dinner.  They eat very low amounts of refined sugar througout the day as I pack their lunches every day. Their school does not allow candy or juice and asks us not to send cookies or any other treats in their lunches unless it is a birthday or special celebration.   They spend a long time picking these treats out and savoring them.  Which is exactly what I hope for.  It is special, it is a treat. It’s moderation.   The candy often lasts us until the next holiday.  Literally we could probably make it from Halloween to Easter and back to Halloween.  We might end up donating it or finding something else that works better in the future, but this is what currently works for us.

I often think people want to get rid of the candy so the parents are not tempted.  This is understandable and I used to be of the mindset out of sight, out of mind and often recommended it and sometimes still do to my clients.  But I have worked so hard in my years to overcome my food obession, guilt and shame around food that I actually want candy in the house.  For me it is like exposure therapy. I am not going to give candy so much power that I cannot have it in the house and have control over me.  Though each person is different and might not want it in the house,  it is actually part of my recovery process.  I want to be in control and know that  I can have a few pieces after dinner without going overboard and eating until I am uncomfortably full or riddled with guilt and shame.  Knowing that it is there and I can have it whenever I want has actually given me much freedom.    This will be one of the topics covered in my upcoming course Find Your Framework that I will be releasing in late January (jump on the pre-sale and info list here).

So though I cannot believe I actually allow them to just freely eat candy, it works for us and the kids have a great time and enjoy the freedom for one night. I always love to hear what other families do so send me an email (healthybabyfitmom@gmail.com) or a comment or message on social media what works for your family.  I would love to hear from you! 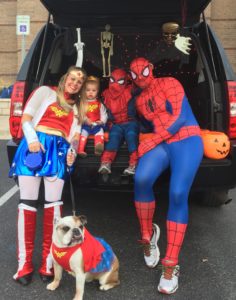 Have a very fun and safe Halloween!